In our last blog-post we posted a video, demonstrating 80 Days. If you watched it, you'll know that we've dropped in one little feature which we think will make the game into something truly special.

The game is a race around the world, and to ensure it feels like a race we've added a multiplayer twist. 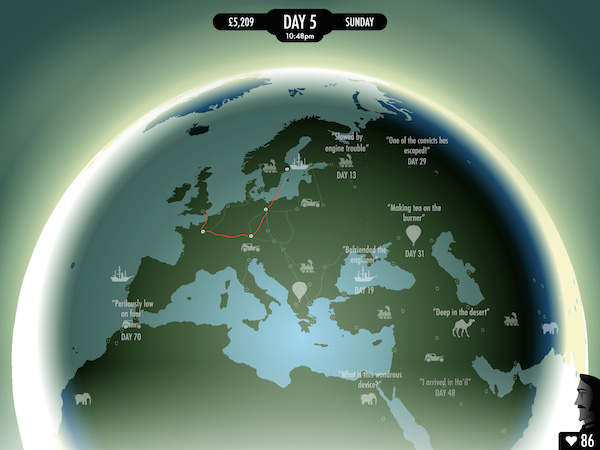 Built into the game is a live feed, showing events happening in-game as and where they occur, to others players around the world. See something interesting, and you can zoom in on that player, see their full route and all the incidents that have happened along the way.

And as you travel, you'll be racing against the ghosts of other real-life players.

Because the clock in the game is always running, every minute counts: spend time in the local market looking for items that might help you, or jump aboard the private car to your next destination? Will you leave something behind - or will you make an onward connection with minutes to spare?

The live feed lets you see the consequences of these choices compared to others. If you're leading the pack, you'll know - but if you fall behind, you'll be able to see hints about the best paths to get back ahead.

From analytics to gameplay

We had the idea for a live in-game feed after the launch of Sorcery! last May. Like a lot of games and websites, Sorcery! included analytics, that allowed us to see how many people were using the app in real-time, and which screen of the game they were currently on.

For the hours after release, we watched with baited breath as people all over the world read the prologue, then started getting into combat, casting spells, and reading the story - and we cheered when the first people reached the screen labelled "EPILOGUE".

And then something amazing happened - the analytics never stopped. Since last May, we've never yet seen the number of active players hit zero. When an app disappears from the front page of the store and other games hit the headlines, it's easy to think it's gone - but analytics prove otherwise. The game is live experience, even now.

And we want to share that live experience with our players.

For 80 Days we wanted to build that living, breathing world directly into the game. But it's not just a feature for the sake of a feature: seeing other people exploring the same world as you is a key part of the experience; it gives you the pressure to go faster and take risks; while the hints you can collect from others successes, failures, disasters and triumphs might just tip the balance of your own game.

Competitive challenge or collaborative help system? It's up to you how you use it.

And of course, there's that headline challenge: make it around in 80 days - or less. The game's network of journeys is now so complicated that we don't actually know what the shortest time is. We're looking forward to finding out and watching it happen - in real time.