September 19th is one of the internet's silliest inventions: International Talk Like a Pirate day. We're celebrating with a launch, somewhat overdue: our adaptation of Dave Morris' splendid pirate adventure, Down Among the Dead Men.

Dead Men is an interactive novel you can play as male, female; governess, changeling, thief, buccaneer, warlock... Be bold or cowardly, a good Cap'n or a scurvy sea-dog. Sit back, and lose yourself in a quest of justice - or revenge.

There are three difficulty modes - from benevolent (where no matter how bad things get you can be sure you'll win out), through fair, to cruel. (If you're interested, cruel is an exact replica of the book. Only without any way to cheat.) 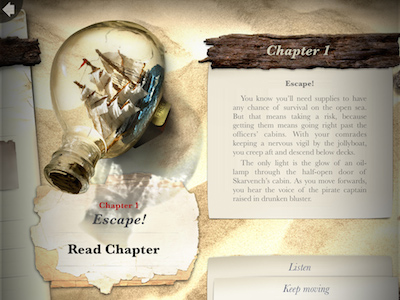 There are hidden secrets, and mysteries galore, from buried treasure, to vampires, long-lost galleons, shoot-outs. There's a monkey, and a parrot.

(True pirate-gaming enthusiasts might also recognise the title, Down Among the Dead Men, from one of the songs performed by tireless robot musicians who haunt the taverns in Assassin's Creed: Black Flag.)

If you've been following us for a while, you'll know we first announced this project in 2012, after the release of Frankenstein. The ship was built and rigged, but ran afoul of its moorings. It's finally been salvaged, dredged, and made sea-worthy once more for your enjoyment, at the cut-down price of one dollar.

If you've played 80 DAYS or Sorcery! then you might be a bit surprised to find Dead Men is a simpler affair, laid out more like a book (well, a message in a bottle, anyway) than a board-game. That's certainly the case: although under the hood, it's running the same adaptive-text inklewriter engine that powers our other games, with 125k words and two thousand options.

So set sail, enjoy, don't forget your cutlass - and you can find more of Dave's work on the Fabled Lands blog. Avast!