Today, we're thrilled to announce our next big title.

What is Heaven's Vault?

Heaven's Vault is a character-driven graphic novel crossed with an open-world adventure game...

... and it's our most ambitious, beautiful and complex game to date.

Our greatest adventure yet!

Initial work on Heaven's Vault began almost immediately after the completion of 80 Days, with a long period of prototyping, as we tried to ask the question: "What does an inkle story look like when you can see it?"

Over three years the team has trebled in size. We've produced over twenty prototypes, ranging from tiny gameplay concepts to whole playable levels. We've been through rounds of concepting to develop our protagonist, our supporting cast, and their world.

And now we're ready to tell you about it.

Meet Aliya Elasra, an archaeologist who studies the lost places and forgotten history of the strange Nebula where she lives.

With her reluctant robot assistant, Six, she will piece together a complex past - and discover a secret that will change the future.

The game draws on a wide range of influences:

We've developed a unique art style, integrating stylish, hand-drawn 2D characters into full 3D environments. The aim is to make every frame look like it could have come straight from a graphic novel.

We rebuilt our ink engine from the ground-up for this project, integrating powerful new features - and open-sourcing it to the developer community along the way.

The game itself is built in Unity and we'll be releasing on multiple platforms - including, for the first time, console.

The prototypes are now complete. We know what we're making, and how. But there's still a lot to do and the game won't be ready for some time.

If you want to stay updated on the game's progress, bookmark the tumblr page below, where we'll be posting dev updates. We've also created a brand new Twitter account and Facebook page depending on which flavour of social media takes your fancy. Or, for just the big announcements, sign up for the newsletter. 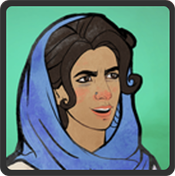 Read the updates blog for the latest news on the game’s development!