Hello! We're inkle - we made 80 Days, Heaven's Vault and Overboard!. Now we're making A Highland Song. Follow along with our progress right here!

A Highland Song is described in the blurb of our announcement trailer as "a narrative adventure with rhythm and survival elements". It's also a game about walking across the wild and empty Scottish highlands, alone.

So how does one tell a story, when you're on your own?

Games are a bit peculiar when it comes to telling stories with only one character: in films it's usually considered a basic requirement to have two people going on a journey together (so they can argue along the way), and even the most introspective books usually move their protagonist from human encounter to human encounter.

But games with solo protagonists going on lonely journeys are common, whether it's Breath of the Wild or Elden Ring. As players, we're used to long stretches without storytelling (or with purely "environmental storytelling", which is really another word for "set dressing") as we go from village to town, or from NPC to NPC (or to a coffin on the edge of a lava waterfall, for some reason).

inkle's games are usually different. When you travel the world in 80 Days you're in constant contact with your master, Phileas Fogg; and when you sail the rivers of the Nebula, your robot Six is heckling you the whole time. But then again, for most of Sorcery! you're a lone adventurer (unless you've been cursed by a talkative, grumpy wizard, I suppose.)

What's made A Highland Song more difficult, though, are the Highlands themselves. There are no villages or towns between Moira and the sea. There are some characters, but not too many - too many, and these empty wilds would start to feel weirdly crowded. Not only that, but the journey goes ever-forwards, so players can't backtrack from one character to another: the people you do meet are quickly left behind.

There are no shops to buy upgrades from, and no bandits or tricksters on the roads. So where and how does a narrative arise?

We realised early on in the project this was a game about walking. And when one's out walking, after a while, things arise - thoughts, feelings, memories... Walking is a way of shaking out your brain and seeing what sticky things come loose. So as Moira walks she has ideas, and thoughts - and she remembers things, the most common of which are things written to her by her Uncle Hamish, who has been sending her letters since she was small. 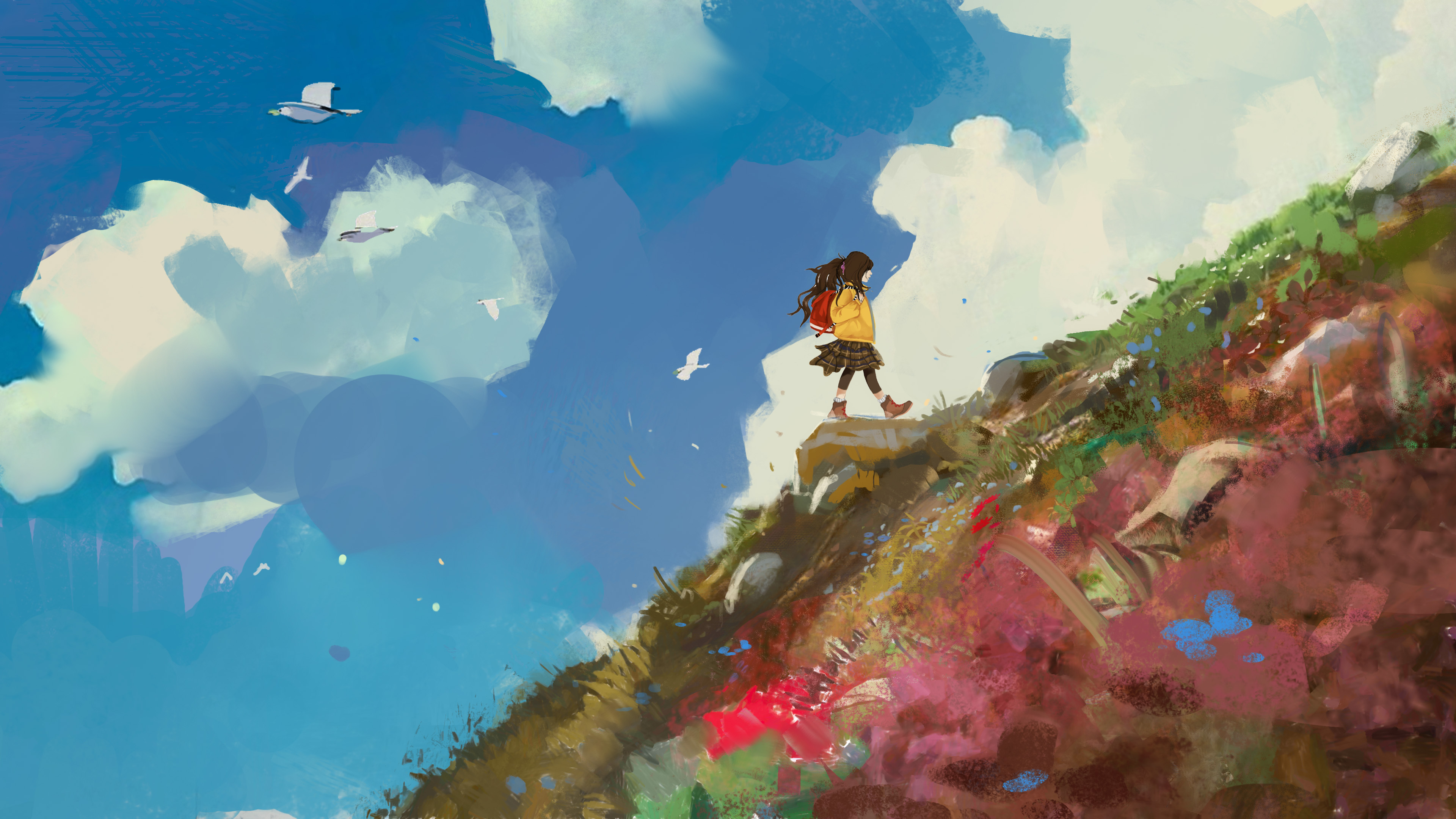 As the narrative designer on the project, one of my jobs is to ensure that what Hamish has to say is - to be blunt - interesting. I might write a wonderful series of remarks on the subject of wild Scottish heather, but if the player hasn't seen any, doesn't know what it is, and anyway, is up in the snow-capped mountains at this point where the heather doesn't grow, it's not going to be very relevant.

This is always a tricky problem in games (how often has a game character shouted out a useful hint or piece of advice to you in a game? And how often was that advice actually relevant a moment earlier, but not any more?) But in a game about stories, and legends - and in a game with a mystery at its heart, which A Highland Song has - it's not just about making sure the storytelling is relevant. It wants to be more than relevant. It wants to be rewarding.

Letters, and letters back

It was on a walk (from a coffeeshop to home) when I understood that I'd been missing something. The problem with Hamish writing you letters (well, having written you letters that you're now thinking back on) is that, unlike a conversation with a sidekick, you don't get to ask questions in return. You can't lead the conversation; you can't focus on what you're interested in; you can't follow up...

... but the other thing about Hamish having written you letters, in the past, is that Moira might well have written letters back. Letters in response to Hamish's letters: letters asking him questions, or asking for more information.

Of course, all those letters were written well before the game started... but what did Moira ask? What should she have asked? Those are exactly the kinds of decisions we like letting the player take for the protagonist. 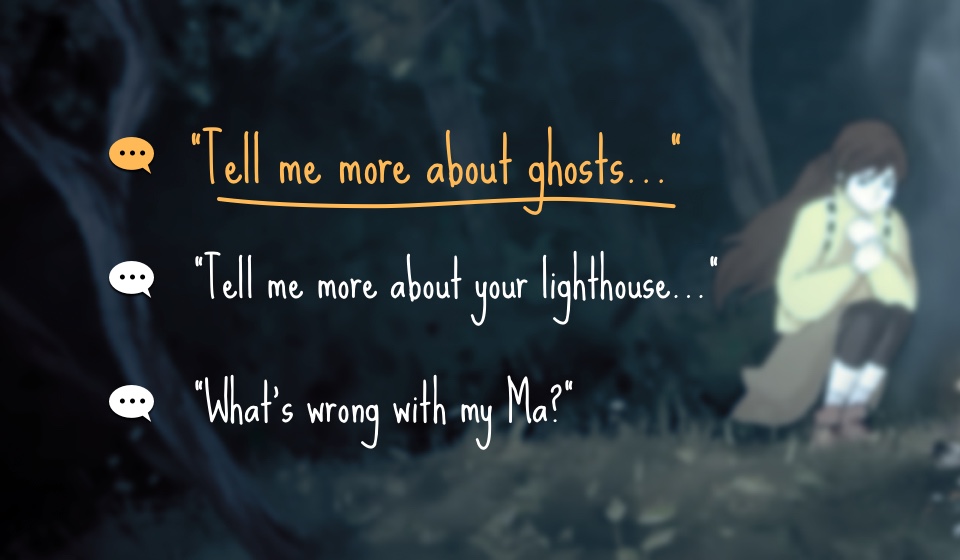 So that leads us to Highland's core "conversation" mechanic, which is perhaps the oddest one we've ever built. As you settle down to sleep, Moira will recall a letter she wrote to her Uncle, asking him something... and she'll recall her Uncle's reply; a little fragment of story, legend, memory (or, like, a joke), all of which add up to form the main narrative thread that winds from peak to peak as you make your way to the sea.

And like the conversations that pass between Aliya and Six in Heaven's Vault, what Moira can ask about is highly contextual, driven by what you've found and what you've seen, by what you've learned recently... What Moira remembers is decided by whatever's at the forefront of Moira's mind, and what threads she's been following.

Guide her to ask more about the ruined castle known as the Outer Wall, and you might learn more about the legendary Queen Morag, which in turn might bring up further questions... but change the subject to Uncle H and his lighthouse, and you'll learn something else.

Explore without and within

A Highland Song is always going to be a game about being on your own, in a place much bigger than you, for which you're ill-prepared. But even if you're alone, you don't need to be lonely. We all carry a universe of voices inside our heads, and there's plenty to explore inside as well as out.

I said above there's a mystery at the heart of the game. Rest assured: Moira has all the answers she needs; if she can only find them...